Now, authors Douglas Dwyer and Jane Pentz serve up an entertaining, educational tale of four teens on supersize mission in their debut young adult novel, No: Book One of the 8th Day Series. Written for young people between the ages of nine and twelve, this empowering adventure will inspire any kid to use his or her skills and wits to create a healthier country for us all.

Dr. Jane Pentz is president of the American Academy of Sports Dietitians and Nutritionists (AASDN). Pentz is the author of a nutrition textbook and several nutrition books as part of continuing education programs for professionals, and has also published a children’s nutrition curriculum that features determining children’s caloric needs and children’s menu plans. Dr. Pentz holds a Ph.D. in nutritional biochemistry from Tufts University.

Doug Dwyer is a career educator who has been a teacher and school administrator from kindergarten to graduate school, working in the Northeast and the South. For ten years, he wrote and delivered commentary for NPR stations with audiences in New York, Connecticut and Tennessee. He has also taught writing to college students. No: Book One of the 8th Day Series is their first collaborative work.

NO – Book 1 of 8th Day Mystery Series has already received great reviews from kids and adults. Not so surprising, adults are also enjoying this fast paced, fact-filled adventure with a purpose.

Not-So-Retired Friends Create YA Novel with a Purpose!


On September 1, 2009, after living and working in Boston for many, many years Bob and Jane Pentz rented a large u-haul van andmoved all their belongings to Florida’s friendliest home town – The Villages – a home town of over 80,000 people. They unpacked in several hours and moved into a fully furnished, beautiful home which included a golf cart. They ventured in their golf cart and dreamed about all the fun things they would do in retirement.

In 2001, after30 plus years as teachers and school administrators, Doug and Sharon Dwyer had retired. After investigating retirement communities they choose a beautiful spot in the South Cumberlands about an hour from Chattanooga. By the year 2007 they were both back working at a local college. Friends invited them to visit their new home in the Villages. Doug was a non believer having seen ads with old people line dancing. To their surprise, both Doug and Sharon fell in love with the villages and bought a home. After a short time as snow birds they moved into their new home full time. 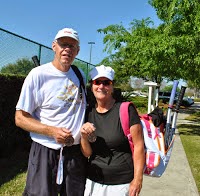 On her second day of retirement, Jane hesitantly walked onto a tennis court only to be greeted by Sharon Dwyer welcoming her before she even entered the court. Several weeks later on an absolutely lovely evening at one of the Villages Town Squares Sharon and Jane met and introduced the husbands. They talked about playing mixed doubles tennis together sometime. They played for the first time the following week and have played almost every week since.

People that know the Pentz’s and the Dwyer’s often comment on the bond of friendship between the seemingly very different 2 couples. Bob Pentz often retells the story: “I never would have believed that one of my best friends would be a liberal, non-drinking buddy. But great friends they are.

In the fall of 2010 while the 2 women were playing tennis together Sharon mentioned that Doug was writing a story for the grandchildren as he does every year at Christmas. Jane discussed how she had written several children’s nutrition books aimed at teaching nutrition to children. Jane shared that her talents were not in writing and that she always wanted to work with someone who had writing skills. After a discussion on the possibility of “coaxing” Doug into a collaborative effort the “girls” devised a plan.

The plan took shape several weeks later at the Villages Barnes and Noble book store. Doug was under the impression that the meeting was to help Jane edit her children’s book. After he painstakingly went through the entire book describing how Jane could improve the writing, Jane found the courage to ask: “Doug this is way over my head; would you be interested in collaborating with me on a new children’s book aimed at teaching kids to eat health?” Doug’s response was slow but he finally answered: “I think I might but let me talk to Sharon first”. Jane had to fight the strong urge to do a “fist pump” and quietly said OK. And thus began the birth of the 8th Day Mystery Series with a purpose.

Doug diligently wrote and created 4 teen characters. It quickly became clear that Doug has a brilliant and creative writing style. The 4 teens came to life and were soon referred to as “our kids”. Jane, for her part provided the health and nutritional aspects to the characters. Sharon was Doug’s constant editor, reading every word and being a sounding board for each idea. Bob was a regular listener, adding advice on technical issues. When crunch time came he picked up all the tasks that needed to be done and were overlooked.

After several months of writing Doug and Jane reached out to ask for help in evaluating the appropriateness of the reading age group and advice on content. After sending emails to many friends they received responses from people anxious to help. Friends from ME, CT, NC, MA and strangers alike added a bit of magic that kept the writing alive.

One such stranger was a woman named Karen who lived in Michigan. Jane sent her an email with the “fledgling” novel as an attachment. They spoke over the phone several weeks later and Jane thanked her profusely for all her input. While much of Karen’s input was very positive there were also a few comments that led to changes in the book.

After digesting the invaluable input from Karen and friends, Doug and Jane went back to diligently completing the Novel. After more than a year of writing, rewriting, sending out queries for agents and publishers, NO – Book 1 of 8th Days Mystery Series was published on March 15th of 2012.

Upon publication of NO, Jane went back to gather the information of the wonderful people that provided input/editing to send them a copy of NO and to personally thank them for their contribution. She looked at the email address from the woman in Michigan. She couldn’t believe what she saw – it was the same email address as her line dancing friend Karen. Could the Karen from Michigan be the same Karen from the Villages? No – it couldn’t be! She had been line dancing with Karen several times a week for over 7 months. Karen and her husband had been to her home for a Christmas cocktail party in which they spoke endlessly about their experiences at the Villages. The next day Jane approached Karen and asked her if she remembered editing a novel about kids. Karen answered no; “The only book I ever edited was about food”. The two women stared at each other and immediately began to giggle as they realized that they had been friends for months and had not made the connection. The Villages, Florida’s friendliest home town, once again lives up to its name!

NO – Book 1 of 8th Day Mystery Series has already received great reviews from kids and adults. Not so surprising, adults are also enjoying this fast paced, fact-filled adventure with a purpose.
Home
Subscribe to: Posts (Atom)